As the tourist guide says: “Trieste is no longer a place to pass through to somewhere else. It’s its own destination.” How true!

The city is not all memories of a rich mercantile century with its extravagant fin-de-siècle architecture. If one goes to the old Roman theatre and takes the road above it one enters a most attractive area reminiscent of a typical Italian hill town. This is the Colle di San Giusto area and if you carry on walking up the steep slope you eventually reach San Giusto cathedral. But there’s lots to see on the way.

For example there’s the baroque church of Santa Maria Maggiore.

There’s the sweet little Romanesque church of San Silvestro alongside it which is now owned by the Valdensian religious community, one of the oldest protestant sects in existence. (There’s also a Valdensian church in Lucca in Galli-Tassi Street. Our choir-master is a member of that church.).

The San Giusto steep winding streets are a delight and so free of traffic. 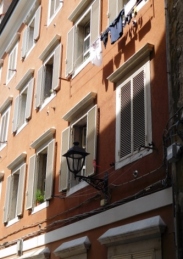 Round a corner one comes across the Arco di Riccardo – a real ancient Roman arch. There are different theories why it is called’ Riccardo’. Perhaps because it’s a corruption of the Latin word ‘Cardo’ for main street. 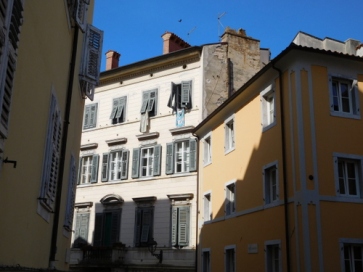 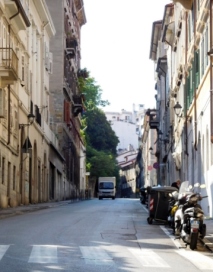 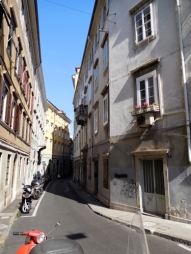 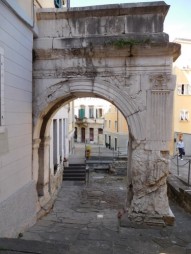 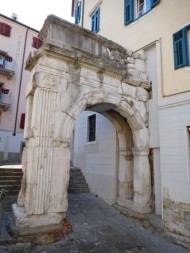 It’s in this area that one comes across the fascinating James Joyce and Italo Svevo museum. It’s so sad that Svevo’s family house in Trieste was bombed in the last year of the war, There are, however, four personal items remaining including the bits of his library that remained: 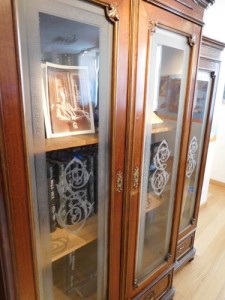 Svevo’s friend Joyce, who encouraged him to continue writing again, had a good tenor voice and almost considered becoming a singer in Trieste. He accompanied himself on the guitar. I often wonder whether the two ever played together. Guitar and violin is a very good combination and both Svevo and Joyce loved going to the music theatre. Indeed, one of Joyce’s poetry collections is called ‘chamber music.’

The museum is well documented and the curator was very helpful. We shared some photographs of Charlton Church lane where Svevo (or Ettore Schmitz as he was really called) lived when managing his father-in-law’s marine paint factory specially set up in London to supply the British navy.

It’s odd how James Joyce came to Trieste to escape from the constricting family life of Dublin and how Italo Svevo was so happy to come to London and get away from his claustrophobic in-laws in Trieste. As they say the grass is always greener….

Which reminds me that Trieste is also Europe’s coffee capital and ‘La Stella Polare is one caffé where the great litterateurs would meet up and chat over their cups of ‘gocciato’ (Triestine for coffee with a drop of milk in the centre) or perhaps they drank a ‘capo in b’ (an espresso served in a very small glass – B = bicchierino). Remember too that one doesn’t ask for a ‘cappuccino’ in Trieste, it’s ‘caffelatte’ instead (certainly not that ghastly London concoction called ‘latte’ in the UK). I go for a ‘capo in b tanta special’ which is an espresso served in a glass with hot milk and lots of foam and topped with some cocoa powder. Who knows what way Svevo and Joyce enjoyed best their caffé to be served to them? Understandably the young waiter didn’t know!

(Alexandra having her ‘capo in b tanta special’ at Joyce and Svevo’s favourite caffè ‘Stella Polare’).

In the nineteen thirties Campari, the aperitif firm that produces that heavenly crimson nectar which goes down a treat with ice, soda and a slice of lemon, had the bright idea of building twelve fountains around Italy with the dual purpose of publicising its products and also of providing much needed drinking water. (Presumably one can’t always survive just drinking Campari…)

There are still a few of these fountains left and our photos show the one we passed a few days ago when we went over the Piastre pass which leads down to Pistoia if one is taking the route from the Controneria through San Marcello Pistoiese.

Although somewhat weathered, the Piastre fountain is a supreme example of Italian thirties monumental architecture with its topical allusions to ancient Roman motives (and Mussolini’s idea of a second Roman empire). The sculptor was Giuseppe Gronchi (1882 – 1944) who also had a big hand in the decoration of that colossal wonder, Milan central station.

Attached to the fountain is a rather indecipherable plaque, with English translation. 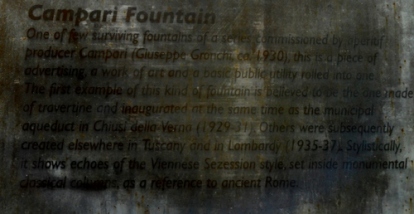 I wonder if you too have come across these Campari fountains in other parts of Italy. I’d be interested in knowing where.

The Campari drink is now over one and fifty hundred years old since it was invented in 1860  by Gaspare Campari (1828–1882) from Novara. May he be deified for devising such an amazing drink!

The Campari soda bottle, which is still used to this day, is worthy of note too as it was invented by one of Italy’s greatest futurist artists and writers, Fortunato Depero (1892 –1960). 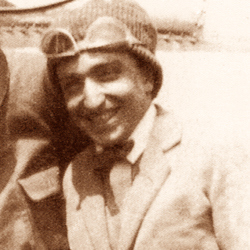 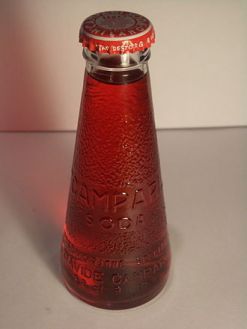 Depero also created some great publicity posters for this liquid of the gods which were way ahead in their designs.

Wouldn’t it be wonderful if there was a Campari fountain festival when the fountains decided to pour out pure Campari? But then I’m wandering into the realms of fantasy, as Captain Mainwaring of ’Dad’s army’ would tell lance-corporal Jones…

PS There is a bar near the fountain which does serve Campari if you’re desperate.

Follow From London to Longoio (and Lucca and Beyond) Part Two on WordPress.com