The indefatigable Marco Nicoli, journalist for ‘La Nazione’, event organiser, founder of the Mammalucco cultural association and general all-rounder, in collaboration with the comune of Borgo a Mozzano, presented an evening dedicated to the history, sights and people of Chifenti as part of the new ‘Borgo e Bellezza’ series of events. 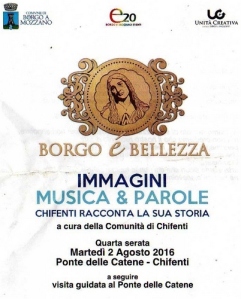 Here are the other participants: 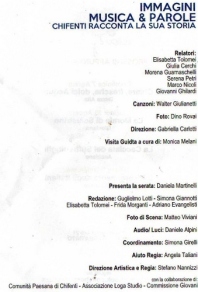 The great symbol of Chifenti is, of course the Ponte delle catene, the chain bridge designed by the great Nottolini who went to England to study engineering with none other than Thomas Telford. The event was on the Chiffenti (south side of the extraordinary bridge, one of Italy’s greatest nineteenth century engineering feats. 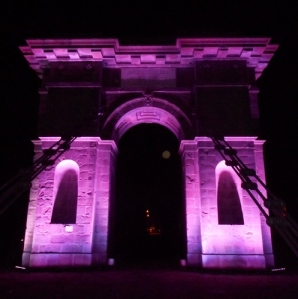 Because a suddenly precipitous thunderstorm fell upon us in the late afternoon bringing much needed rain, but also causing a few electrical problems, the evening was somewhat delayed but it finally got off to a good start after an inaugural speech by Borgo a Mozzano mayor Patrizio Andreuccetti. (Yes, Chiffenti is in the comune of Borgo – the bridge doesn’t just span the Lima River but unites two boroughs.)

The show consisted of reciters, the great Walter, ex-barber of Ponte a Serraglio on guitar, a big screen and some splendid lighting (when they finally got it to work).

Chifenti’s history dates back to the ancient Etruscans and Ligurians. Of mediaeval remains there are traces of a castle on the hill above Chiffenti where the original settlement was located. The construction of the Brennero road brought Chifenti down from its original hilltop location to line the important route north. Eventually, after the washing away of the old stone bridge built by Castruccio Castracani ,and dating from 1317, the pioneering chain bridge was commissioned in 1840 by Carlo Ludovico from Lorenzo Nottolini who’d travelled to the UK to study the construction of the Clifton Suspension bridge in Bristol and Hammersmith Bridge in London.

Badly damaged by Gerry, the bridge was restored in 1953 at which time it was open to all traffic whether vehicular or pedestrian. (Now you dare drive a car, or even a scooter, across it!).

The speakers were all excellent with the unflagging Morena Guarnaschelli reciting the part of Mrs Stisted whose husband encouraged the building of the Anglican Church, now library, at Bagni di Lucca. Mrs Stisted’s reminiscences were fascinating. She remembered logs being floated down the Lima tied together into rafts which became thus both transport and merchandise. In those days it was the only way to transport huge tree trunks down-river to supply the ports of La Spezia and Livorno in the building of their ships. The job of manoeuvring the rafts down the river was both a specialised and a dangerous craft.

Chifenti church was also described in some detail. Recently restored, it has some beautiful features like the tabernacle for the holy oil made by a pupil of the great Lucchese sculptor, Matteo Civitali.

And then on to more recent times. Characters from the world of sport and commerce made an appearance, many of them remembered still today when the Piazza was filled with shops and industries and was a true social life hub. Happily, the bar Tintori  together with some shops (flower and gardening outlets, one of whom supplied nice floral displays for the evening) still exist but they are but a faint recollection of what the piazza once was like in terms of activity. 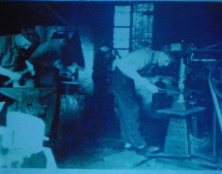 It was a great little evening beautifully presented (once the technical difficulties wreaked by the thunderstorm had been sorted out) and was a wonderful example of how a community can come together and present entertainment and instruction in a lively and fascinating way.

For me the highlight was, apart from some amazing photographs from the archives, certainly hearing for the first time Walter, our retired hairdresser and barber from Ponte a Serraglio, singing and playing his guitar. Not only did the memorable Walter play local and self-composed songs – he proved himself a master in renaissance guitar music and even played a lovely version of ‘Scarborough fair.’

Well done to all concerned. It was a truly memorable very well attended evening and we hope one of many more to come. This is truly what our community needs!

The programme continues. Here are future appointments. Don’t miss them!

Follow From London to Longoio (and Lucca and Beyond) Part Two on WordPress.com