Of all the artists currently exhibiting at the Sala Rosa at Bagni di Lucca’s Circolo dei Forestieri, Alvaro Bei is the most inscrutable yet most instantaneous. Born in 1948 in Lucca where he still lives, Bei had evidently been a very promising art student but, due to family financial pressures, had to up any idea of earning his bread as a painter and followed a career in the voluntary sector and politics instead. Only when retiring at age 62 did Alvaro return to the paintbrush – a thankful decision because his canvases are full of immediate impact – indeed several of them contain the surtitle ‘flash’ and have a very cosmopolitan range of views.

Take this series of cities of towers which clearly range from New York to Lucca.

Bei has a strong affinity with both cities but does not neglect the beautiful Tuscan landscape surrounding Lucca.

Diamond-edged skies, a true feeling for raw urban streetscapes and a clever combination of collage and perspective are further distinguishing features of his technique. 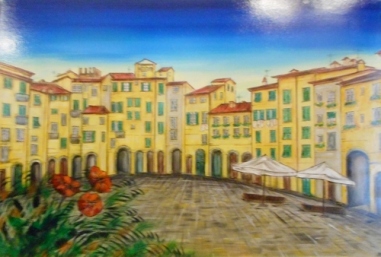 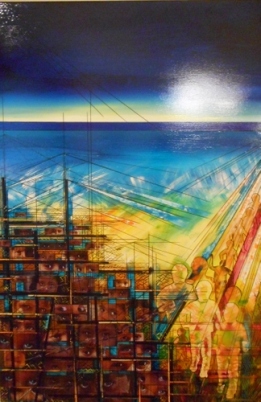 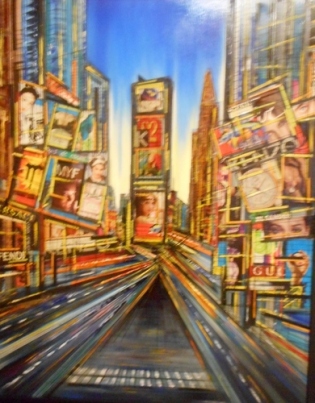 Alvaro Bei has also been involved in the production of two important books about our area: ‘ Lucca Val di Serchio e Versilia’ , of 1991 and ‘Luoghi sacri-Luoghi d’arte (Pacini-Fazzi) of 2003 and the artist’s incisive and immaculately observed paintings owe much to his experiences both in travel and as a book publishing collaborator.