Judging from the programme it’s going to be bigger and better than ever before. It’s also ‘biennale’ which doesn’t quite means that it’s happening every two years instead of annually. It just means that every two years it will be extra-special. I think this is a good idea as it gives scope for better organization and more collaboration. The festival is also free. Those occasions when admission was charged were certainly not popular ones!

Here is the programme and I think even non-Italian readers can spot that there’s everything, not just from Azaleas but to vintage lambrette (can’t miss those) to visits to local places of interest including the gothic line and the astronomical observatory. There’s also a space for a mythical Fiat 500 (Cinquina) rally so I might be driving our one up there too.

Why did Borgo a Mozzano anyway choose to have an azalea festival which is now in its thirtieth year?

It all started in 1954 when the Italian Shell petrol company wanted to give a boost to depressed agricultural communities. Their research found that Borgo’s micro-climate was ideal for growing azaleas. They also found that many locals were already growing azaleas in their gardens, not for any economic reason but just because they were attractive plants to have.

It was, therefore, an easy and quick transition to persuade several farmers and gardeners to grow azaleas for a wider market.

In 1970, Borgo’s first azalea show kicked off the areas’ reputation for this beautiful plant. News spread fast and growers from Pescia, Pistoia, Montecatini, Pontedera and Pietrasanta were also invited to the occasion. Local schools children contributed with their own drawings and exhibitions.

After the first azalea festival success, Italy’s Agricultural Research Center helped all those willing to cultivate this plant and species were improved and new ones hybridized

Since then it’s been literally a growing success story which has also stimulated tourism and agriculture in the region and given an international standing to a town once hardly known outside the Lucchesia.

The festival forms part of the Lucchesia’s green network which also includes the following garden festivals, all well known to visitors to our area. They comprise: the Ancient Camellias of the Compitese, and the two major Lucca garden festivals: Murabilia and Verdemura.

Here are some photos from the Azalea festival in Borgo we attended in 2009: 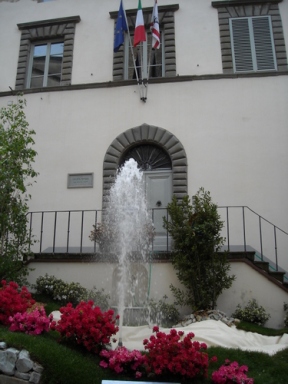 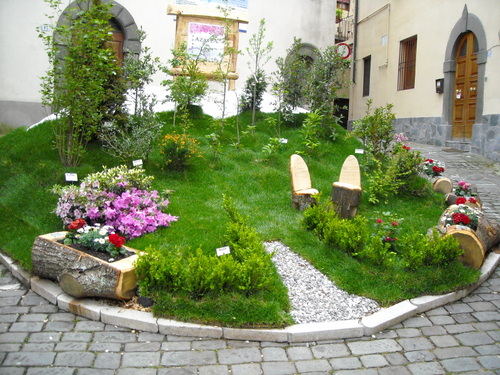 Something about azaleas (which in Italian have the stress on the ‘e’ so here they are pronounced ‘azalèa’ instead of English ‘azàlea’):

Azaleas form part of the ericaceous family, a species which dates back seventy million years! They are related to rhododendrons and are now classified in the same family (azalea lovers in Wales beware!) Most azaleas we see are descendants from Asian shrubs where they were originally cultivated by Buddhist monks in their monastery gardens. By the late seventeenth century azaleas had reached the west.

The azalea is also Nepal’s national flower. It’s frequently mentioned in Tang Chinese poetry. For example, Bai Juyi, a Tang Dynasty poet born in 772 A.D., loved azaleas and planted them in his garden mentioning them in one of his poems as “a beauty amidst all flowers.”

There is a Chinese legend that states that a long time ago a king was assassinated and turned into a cuckoo. Because of the king’s vicious death, the cuckoo sang so loudly and intensely that blood poured out from its bill. In our part of the world April is when the first cuckoo is heard, so maybe there is truly a relationship between hearing the first cuckoo in the spring and those azalea with blood-red blooms.

Anyway, enjoy your azaleas whether you are in Nepal, China, Japan, the UK or even at Borgo a Mozzano!

Meanwhile here’s one of ours:

5 thoughts on “Astounding Azaleas are Arriving!”