Don’t think that Italian car drivers show the most unacceptable road manners in Europe and that the British are the most courteous, never failing to obey traffic regulations here, including stopping at a zebra crossing when there’s a pedestrian. English ‘Road-Rage’, was thoroughly demonstrated in its full capacity of bullying and vulgarity yesterday when, after a beautiful day in Garfagnana, we headed to the Blood donor Festa at San Cassiano, a festa we try to never miss for its liveliness, sociability and great contribution to those who need our blood (and I do not speak of Dracula!).

Once out of the parking lot and going home via the steep hill coming out of San Cassiano towards Bagni di Lucca, we were blocked by a black car. Before we tried to tell the driver of this car, ‘please, reverse into that space just behind. out of this car came the English words: ‘you reverse’. My wife, who was driving, tried to explain in English. ‘Please reverse. There is a place just a few steps to your right where you can wait and let us pass. This is the regulation in Italy ‘. In fact, she was referring to that part of the Italian Highway Code which states:

On mountain or otherwise steep roads, if passing each other is impossible, it is the driver going downhill who must  pull over and stop as possible to the right edge of the road or move back to a wider part of the road where there is a passing place.

In the event that it becomes necessary to reverse, it is necessary to have regard to the type of vehicles: – combinations of vehicles (i.e. vehicles formed by a tractor vehicle and a trailer) always have priority over other vehicles; – Vehicles of total mass full load exceeding 3.5 tons always take precedence over the overall mass of a full load up to 3.5 tons; – Buses always have precedence over the trucks. In the case in which the vehicles are both belonging to the same category among those mentioned above, (that is, in our case), the reverse must be carried out by the driver of the vehicle traveling downhill.

At this point the British car tried to move forward blocking us against the grass and rock verge on our right side. In addition, it was in danger of smashing into a parked car on it right. My wife warned them that they could damage that machine.

No way! At this point, words were coming out of the British car which can’t repeated in full here – only to say that they related to female body parts ‘you c ***’ etc. The female in the British car then got out in the middle of the road and repeated these same words. We noticed that her accent was not exactly BBC standard. (In England, if an English person opens their mouth, it soon becomes clear not only where they live, but often what their life-style is like. This is the tragedy of the English. Just think of that delightful musical “My Fair Lady” with the incomparable Audrey Hepburn to understand this sad fact).

“Our car is bigger than yours,” continued his companion. This typical example of bullying failed to move our car, now stuck between a rock and a hard place. Finally, the British realized that there was nothing to do but to begin reversing to the passing place not far behind their car and which had been so kindly vacated by the Italian car behind them.

When we could finally pass, the driver of that infernal English machine opened his window and said to my wife in English, “Are you happy now? You f ******* c ***. ”

What a nice end to a day full of joy for us!

Who are these vulgar Brits who invade our Controneria summer and do nothing but drink, drink, drink, who have not read a verse of Dante, who cannot even order a coffee in Italian, who cannot distinguish a Vasari from a Veronese, who trash this beautiful country, in short, believe that the imperialists are still in this blessed land. Would they like to reconquer the Lucchesia as they once did after the battle of Waterloo? 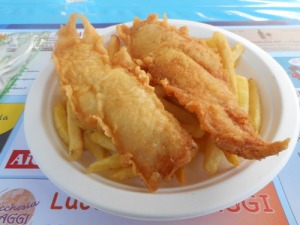 (A better contribution to Italy from Britain – our plate of Fish & Chips at Barga’s delicious Sagra di Pesce e Patate which carries on until 16th August) and where we supped yesterday. 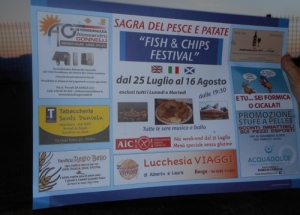 6 thoughts on “English Road-Rage in Italy?”