With simultaneous English translation by

Of course one can’t take photos of oneself reading or presenting poetry. That would be too much of a selfish selfie! But I’ve got these photo from Jaqueline Varela, prime mover of the Festival ,and thought that they might be presented here as a little adjunct to our space at camera oscura.

Readers shown include Alexandra Pettitt, Jenny McIntosh and me. 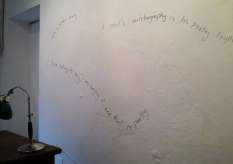 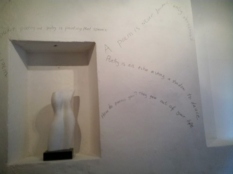 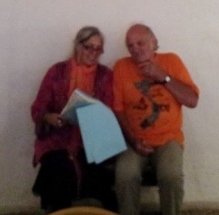 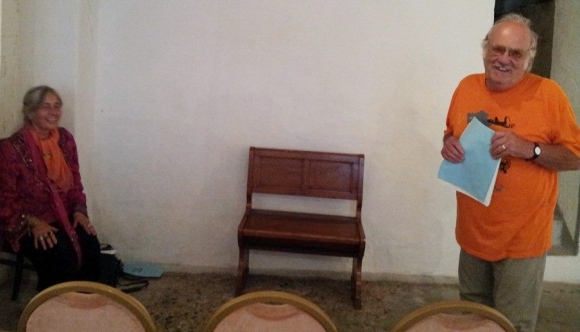 Yesterday evening’s reading, as part of Bagni di Lucca’s continuing Arts Festival, at the camera oscura by Mara Mucci of her poems, with English translations by Norma Jean Bishop and Francis Pettitt, was very well attended by a mixed audience as regards their first language, their age, their background and their gender. 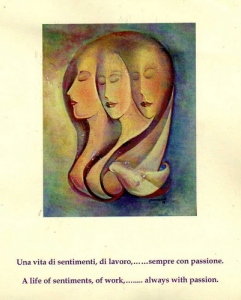 It was a truly inclusive evening such as we all wish every event in our Bagni di Lucca arts festival should be. Language, which often divides people, united them here thanks, first of all, to the wonderful poems that Mara writes which, pace T .S. Eliot could be understood as soon as they were communicated.

What was so great was that the audience consisted of local people, people that had come from far-away countries, people who were painters, sculptors, factory workers, technicians, pensioners, housewives. Indeed, every section of the community of Bagni di Lucca was represented giving the lie to some voices who think that such events in some mysterious way often divide the town. This is simply not true!

Mara’s words speak to the heart and the editor of Grapevine and me worked hard to produce translations that reflected as truthfully as possible the original sentiments expressed.

If you buy next month’s “Grapevine” you’ll see the editor’s translation of one of Mara’s poems included in it.

I first met Mara on International Women’s day earlier this year at Ponte’s Casinò (see my post at  https://longoio2.wordpress.com/2015/03/10/international-women-at-bagni-di-lucca/) and was impressed by the honesty and beauty of her writing. She described herself as a feminist who writes poems.

I added, at the end of a truly captivating evening: “Mara you don’t just write poems. You are a poet.”

Everyone concurred with this sentiment. An encore was asked for and duly given.

I would like to thank you much for the time you have taken in translating my poems and congratulations for your great capacity as a presenter.

What more does one need at festival? One kind phrase of appreciation is worth all the money in the world. As it is said “there’s no money in poetry but there’s no poetry in money”.

Radix malorum cupiditas est. Let us spend more time giving to each other the truly valuable things in life, warmth, cooperation, love, ideas, dialogue, hope now and for the future. These are the energy cells on which the Bagni di Lucca festival runs and will continue to run.

Incidentally, don’t forget tonight’s event on the theme of water starting at 18-00 (6.00 pm for you, Captain Mainwaring!). It’s yet another unmissable event in the brilliant festival which will run until August 10th.

There’s a person in the centre of the river Lima just south of the bridge at Ponte. He hasn’t moved from there for quite a few days. The person is made of metal. 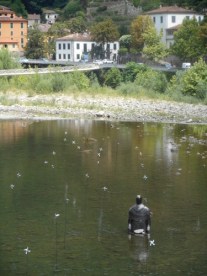 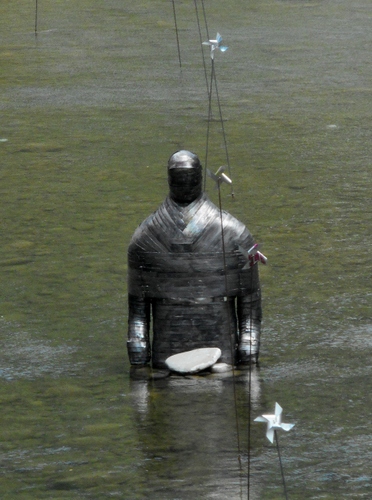 At this time of year he’s not very wet but he could find it very different when the rains promised after Ferragosto (the middle of August Italian bank holiday) start up.

Who is this person?  His name is Kepler and he has landed here after a journey that took him one thousand four hundred light years to achieve. No wonder Kepler’s taking it easy relaxing in the cool waters that bathe this part of Bagni di Lucca.

Johannes Kepler himself was a remarkable man. Born in Weil der Stadt in 1571 he died in Regensburg in 1630. Besides being an astronomer he was also a mathematician, a musician and an evangelical theologian.

His three laws of planetary motion, called Keplerian laws, laid the foundations of modern astronomy just as much as Galileo’s discovery that the sun is the centre of our solar system.

Without entering into more complex arguments all you need to know is that Kepler discovered that the planets move in an elliptical path, in contradistinction to his mentor’s Tycho Brahe’s impossibly torturous planetary paths which involved cycles and circles.

Kepler died in distressed circumstances and on his grave were inscribed the words:  “Mensus eram coelos, nunc terrae metior umbras. Mens coelestis erat, corporis umbra iacet” (I measured the skies; I now fix the shadows of the earth. My mind was in the celestial spheres, now my body lies in obscurity)

As for the planet Kepler it’s actually called Kepler 22-B and rotates around a star called Kepler 22. Unless we find a faster way to travel than the speed of light I doubt that most of the next thousand generations to come will get a chance to shake hands (if they use that custom on Kepler 22b) with any of the planet’s inhabitants.

It would be easier to approach our own Keplerian inhabitant in the centre of the Lima instead. It’s a sweet thought that it’s there and makes us earthlings feel that little bit less isolated in the vastness of space. (Although Prof. Hawkins has professed that he’d rather not like to engage in encounters of the third kind just in case they prove less friendly towards us than we might otherwise imagine!).

Mr. Kepler’s surrounded by tall helix-sticks which make a nice noise when a breeze rises up, as this video shows:

Kepler’s nearest relation, however, is not so much us bagnaioli but Anthony Gormley’s amazing “another place “sculptures on Crosby Beach in Lancashire, as a local artist and friend pointed out to me.

But then art builds on art and has always done. Michelangelo wouldn’t have been able to paint his Sistine chapel’s last judgement without first seeing Signorelli’s frescoes in Orvieto cathedral, for example.

Anyway, we won’t have to travel 1,400 light years to visit another Keplerian-like person – just take the plane to Manchester airport instead.

The river installation has now become a prime feature of Bagni di Lucca’s Arts festival and this year Mr Kepler will attract and be remembered by all those who have seen him or even dared to walk across the pebbles to touch him.

This is my fountain of life. It saves me as it’s saved so many from the past: from ancient Romans to Michel de Montaigne, to Shelley and to Puccini with their stomach complaints, their neuroses, and their over-indulgences.

Its waters are hot, soothing, pure, coming from the entrails of a volcanic mountain and they will cure everything from kidney stones to most stomach complaints. And it’s free! Just stop and drink….

Every winter as I scooter down the extra-cold high street of Ponte a Serraglio to my various activities teaching English they save my hands from freezing. I always stop there and their warmth is balm to my spirit.

With water at 37.1 degree centigrade it’s great for one’s digestion, for one’s one-too-much G & T and, strangely enough (when cooled down a little), for one’s tomatoes in the orto.

Long live La Cova waters! It’s one of the finest reasons for living here. I could never be elsewhere now.

“You really got me” (Bagni di Lucca) as the Kinks sang in that wonderful song by Ray Davies.

I wish I could paint the extraordinary green colour as the sulphuric waters hit the hard magmaic stone. Artists you have a go!

“Covare” is when hens (or my ducks) lie over their eggs waiting for them to hatch. Might be a useful beverage for those wanting kids?