The dissociation of sensibility remarked upon by poet T.S. Eliot when referring to a separation of thought and feeling that entered into seventeenth century poetry and distinguished the earlier metaphysical poets from writers like Milton onwards remains a much debated theory among critics today.

What for me, however, remains an even greater dissociation of sensibility is that between pre-reformation and post-reformation Britain. When one considers that art and crafts from the British isles were admired in the highest degree by Italian artists in mediaeval and renaissance ages, quite apart from wool from British sheep which not only created some of that island’s most magnificent churches, especially in east Anglia and helped the Florentine guilds amass their wealth through the import of this commodity, as the “arte della Lana” so amply demonstrates (as does the woolsack in the British parliament on which the speaker of the house of lords sits and which represents the great wealth Britain supplied during the middle ages) then one realises just how much was lost and destroyed through the dissolution of the monasteries by that pre-ayatollah, Henry VIII.

Yes, Britain has had its Taliban not once but several times and, most disastrously in the sixteenth century. What that century failed to achieve in bamiyan-like destruction it finished off in the civil war of the seventeenth century.

I remember being told by my Welsh teacher many years ago that Wales anciently was a smiling country with festivals galore, famous for its merry dancing and laid-back moral attitudes.

The anti-romish destructions of previous centuries was cemented by the spread of anti-conformism in the nineteenth century as witness the many typical chapels, erected in a variety of styles from neo-norman to neo-classical, scattered around the country, many of which today have found a variety of alternative uses from visitor centres, private homes, sports venues and even night clubs.

There were, however, once great abbeys in Wales, the greatest being the CIstercian foundation at Tintern, still magnificent in its fallen glory and which I was reminded of when I saw that other great Abbey ruin last summer in Italy at San Galgano.

Tintern was the mother house and on our way back from the bay of Cardigan we visited one of its dependencies, Abaty Cymer, near the village of Llanelltyd. The abbey, dedicated to Saint Mary, was founded in the twelfth century by Maredudd Ap Cynan Ap Owain Gwyneth and never became very large or opulent. Its income came largely from horse-breeding and sheep-rearing.

The entrance to the Abbey ruins was through a delicate carpet of snow-drops. Again,  this was, for us, a trip down memory lane as we’d last been here over thirty years ago. Here are some pictures from that visit.

And here are some from our trip this week: 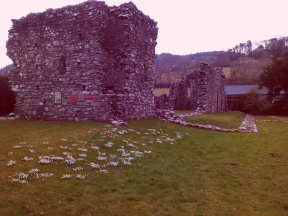 I wonder how many years will pass before we return again….

2 thoughts on “A Little Welsh Abbey”