The hamlet of Domazzano lies on a side route from Borgo a Mozzano to Lucca. One turns off at Valdottavo and find the sign for Domazzano to the left.

Lying at a height of 190 metres and with 130 inhabitants, Domazzano is a sweet little scattering of houses with a beautifully simple Romanesque church, remarkably untouched by later accretions, a separate, later, campanile and some gorgeous views.

The church dates from the twelfth century and still preserves the original plan. It was slightly damaged in the last war, as a result of which tombs arranged in a herringbone pattern following the main church axis were discovered and an opportunity was taken of removing later additions, including a wall that separated the nave from the gracefully curved apse, and taking the walls back to the original stonework, thus restoring the building to the typical single nave plan of so many Romanesque churches in Lucca province.

Domazzano assumed an important role during WWII when it lay on the main Gothic line. From it a footpath leads to the top of a hill where trenches laid as part of the defences can still be clearly seen. 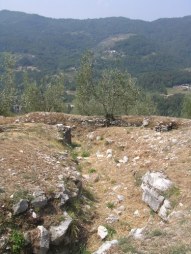 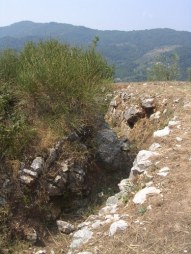 The walk up to the top takes little more than half-an-hour.

Also well-preserved is this casemate. The view from it is very beautiful – so ironical for such an instrument of death. (Incidentally the word casemate, or armoured structure, comes from Italiana “casamatta”, the etymology of which is unknown. Literally it means “mad house” –  I think anyone designing these structures, or manning them, must have been or become mad to do so.) 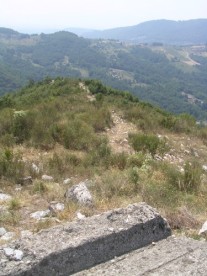 There is also the base of a cannon platform.

Returning to Domazzano you can take a different route through a beautiful wood.

Domazzano’s war memorial is an odd mixture consisting of a plinth dedicated to those who fell in WWI and an added G.I. helmet with a US star to commemorate the allied intervention in WWII.

We’ve done this lovely walk at least four times. The pictures you’re looking at all date from July 2006.

1 thought on “War and Peace”