A hidden flower has re-opened its petals in the walled city of Lucca after over fifty years of neglect. It has neither perfume nor leaves. It is not seasonal and is already several hundred years old;  yet it has blossomed as fresh as ever and one enters into its stamen as enchanted as entering into a perennial paradise.

It is none other than the church of Santa Caterina di Siena– Saint Catherine, one of the doctors of the Church, who has given her name to Lucca’s  highest and most original achievements of baroque religious buildings: a place worthy of the best architecture of Rome practised by such exponents as Borromini and even Bernini.

Like them (and interestingly like Sir Christopher Wren in London) the architect Francesco Pini was faced with an awkwardly shaped site and used his ingenuity to the full to exploit that awkwardness. Using the oval as the main geometric theme (c.f. Rome’s San Carlo alle Quattro Fontane) Pini creates a masterwork which is not only one of Lucca’s very few totally originally planned baroque churches (so many of Lucca’s so-called baroque interior are adaptions of pre.-existing structures dating back even to the Romanesque period) but a joy to behold, a pleasure to savour and an atmosphere to lift even the most leaden heart to true ecstasy and joy.

Santa Caterina, built between 1738 and 1748 and, therefore, a late baroque quasi-rococo structure, is also known as the tobacco-girls’ church as it’s placed just across the road from the old tobacco factory. Who knows how many prayers were dedicated to the saint for propitiousness in sweethearts’ attachments or just work promotion, how many secretive amorous assignations or sudden darts of eye-catching love took place under the gaze of Saint Catherine of Siena, that saint most prone to extasies and adoration so well exemplified in her writings, especially in her Dialogue of Divine Providence? 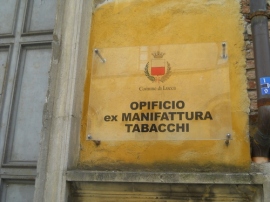 The designs for the sumptuous decoration of the interior which elevate the gorgeous church to a giant reliquary are probably by another Luccan, Silvestro Giannotti. 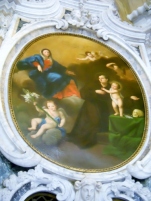 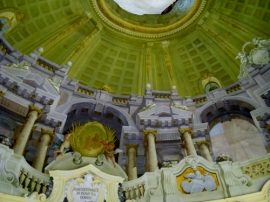 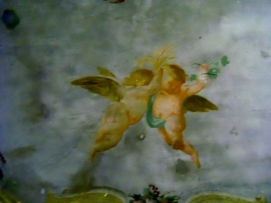 The two wonderful statues of charity and purity are possibly by Giovanni Lazzoni and Giovanni Antonio Cybei. 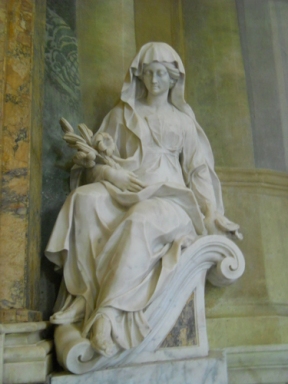 The high altar was once decorated with a large oval canvas of The Ecstasy of Saint Catherine by that doyen painter of the English nobility, Pompeo Batoni, which is now in the Museum of Palazzo Mansi. I do hope it can be returned to its original location.

The wall paintings and the fantastic illusionistic decoration of the dome are by Bartolomeo de Santi. 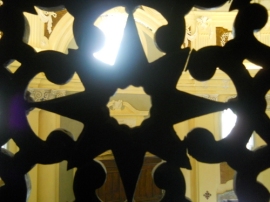 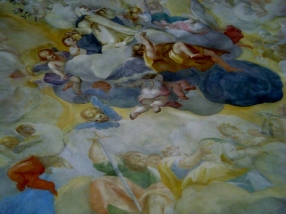 That dome is a quite extraordinary achievement. We had to do a steep climb to realise that the church’s dome is contained within a further structure with massive timber beams and that the dome has an oval opening above which at a height of around two metres is an angelic painting hovering over it. The restoration has strengthened this structure with steel chords similar to the great chain which surrounds London’s St Paul’s cathedral’s dome. 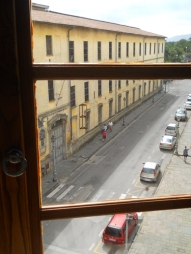 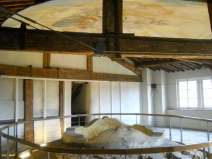 The ethereal light glistening on this apotheosis comes from windows, formerly opened to the elements but now glassed in.

We were so privileged to see this true diamond of a church in Lucca opened up for the very first time after years of restoration on its first day.

Of course, we had been to the huge church of San Francesco when it was opened last year (See my post at http://longoio.wordpress.com/2013/04/16/new-life-to-an-old-quarter/)

But if san Francesco is a like a great symphony – perhaps a symphony fantastique – then Santa Caterina is exquisite chamber music – a Mozart quartet at the very least.

How lucky we are to be living near a city that is finally rediscovering, revaluating and restoring buildings that are the equal of anything that Florence or even Rome can produce.