For Bagni di Lucca, July the 4th isn’t just American Independence Day, or the anniversary of the greatest tank battle of all time at Kursk. It’s first and foremost, the official opening of the  town’s Arts Festival which will continue until the 10th of August (and perhaps beyond?) and which is now celebrating its second year.

Ponte a Seraglio returned to being a happy social place with its trafficked road now pedestrianized and its old abandoned shops attractively turned again into art galleries. It was a metaphor for the Val di Serchio itself, with each window-shop opening into yet another valley of treasures of creativity and imagination.

And what riches! Everything from sculpture to painting to weaving to music to food and wine was there for the enjoyment of all who came last evening. 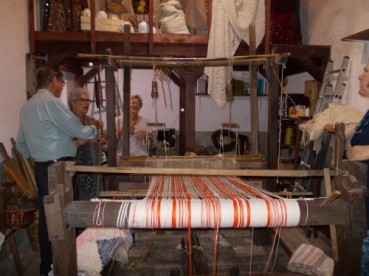 I have seen Jenny McIntosh’s slightly larger than life figures evolve from spectral cadavers, born in the deepest recesses of a tomb’s walls belonging to an unknown civilization, and spring into spry agile (and slightly playful) characters expressing themselves against a background of cosmic darkness. Who are they? What are they gesturing with their bodies? In mysterious ways they communicate and each one of us will take home visual fragments from them, colouring our dreams and haunting our new days.

Someone who is certainly not spectral, although regrettably mostly entombed within the mausoleum of his house at Bagni, is Sam Stych who was fully present and correct at Jenny’s exhibition. It was Sam, indeed, who inspired Jenny’s first major show of Boccaccio’s women and he remains one of the world’s leading experts on the writer whose story-telling inspired so much of European literature (including Chaucer himself). At age ninety-eight Sam doesn’t get much of a chance to get out and I was so pleased to see him there among the public he enjoys talking to, thanks to the efforts of the artist and helpers. 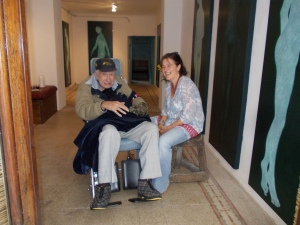 Shona Nunan’s contribution clearly echo her deep interest in what probably remains the oldest continuous artistic tradition today – that of the Australian aborigines. Allied to her work there is also a metaphysical still-life tinge in the form of such Italian painters as Morandi. We are only what dreams are made of and everything we sculpt, visualise or sound is an amalgam of realities we have experienced on the skin, the eye and the ear and which become transformed into visible imaginings. 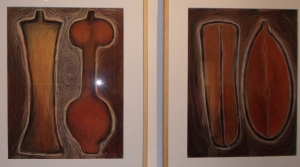 I spent some time looking at the painting of Dennis Tae Wook Kim and talking with him about them. The textual three-dimensionality of his work tempted me to want to pass my fingers over them – which clearly I didn’t! One canvas, in particular, had an unsettling science fictionality about it – the remains of yet another undecipherable civilization in a distant galaxy? Within the strange fluidity of methanic rocks and nebulous panoramas, a rising animal-like-rock (or rock-like-animal) held up a perfectly-formed rectangular plaque like an ancient Roman sign signifying…. nothing? 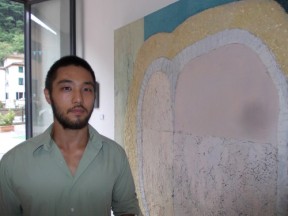 What art may exist on other planets? For wherever there are signs of life there is art – whether it be in the sculptural forms of termite nests, the filigreeness of spiders’ webs or the edges of Mousterian flints.

After the large canvasses of Dennis Tae Wook Kim it would have been easy to have only given a cursory look at the small pictures of Lise Bouissiere. Small only in size, however, since within their delicate and misty gradations of greys, blacks and whites were all the sidereal permutations of rocks, lichens and everything which lies at the core of this earth we tread.

I felt there was an association between these paintings and the exfoliation of the old frescoed ceiling above: 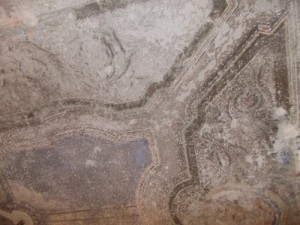 Indeed, if art takes from the reality  around us, it, at the same time, restores to that reality the ability to see things we had previously not noticed or deemed unimportant, to renovate our senses and  renew the uniqueness of the life we, each one of us, are so fortunate to own (albeit temporarily…). There will certainly be plenty of time to renovate one’s senses at Bagni di Lucca’s Arts Festival at Ponte a Serraglio and there will be many more exhibitions and artists to follow.

Lots more information at the festival’s web site at

3 thoughts on “A Feast of a Festival”